Hopefully this thread will remain focused on how to maximize the performance of our normally aspirated DA40s.

Not why… I disagree with all of those points, but would prefer to keep that separate.

We lifted off runway 36 prior to the end of the 2000' displaced threshold and averaged 403 fpm during the climb. Which is quite serviceable, and about 32% better than the AFM “cruise climb” charts indicate: 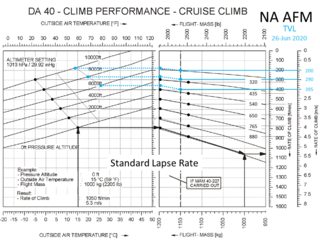 Note that the AFM charts... Chris

I really appreciate you putting the effort into this post. I was in Truckee the other day and was *very* focused upon weight, performance, density altitude, etc. The airplane performed well, but I really wish I had a better climb rate.

Short version: Was only averaging 2630 rpm on takeoff, got that fixed to hit 2680. Noticeably improvement on initial climb. It may be worth checking if you are getting all the rpm allowed. I’m not sure if this is completely relevant to the OP as it only relates to the initial climb.

For the last 1 1/2 years we have been flying our plane the average max rpm has been 2630 per the Savvy Report card. This is noted as being “ average when compared with your cohort“. That seems to imply a whole bunch of DA40's are not hitting the 2680 +/- 20 in the POH. I probably should have investigated this earlier. I had asked my mechanic about it and he didn’t seem like it mattered all that much. I noticed on the prop governor that even at full prop forward, the max rpm screw wasn’t touched. The upshot of that was it was impossible to even adjust for max rpm. I then noticed the faceplate of the prop governor looked like it had rotated as the hex screws that were hold the faceplate were rotated 1/4 inch off center. During a recent mag IRAN I asked the mechanic to re-center/rotate the faceplate. Now at prop full forward the stop touches the max rpm screw. The plane now is hitting 2680.

The extra 50 rpm makes a noticeable improvement on initial climb and acceleration. We fly out of KAPA (5800')

Even though we can use 2700 rpm all day, we tend to pull it back to 2500 rpm after we get cleaned up and climbing well. CHT goes down and it climbs well enough.
Top

Yep. You are correct!

The embarrassing part is that I had that PDF on my computer and annotated the performance sections in 2015.

Fortunately the performance change from 2400 to 2700 RPM is about the same as shown by Superior.

A behavior of my engine ever since new and continuing to this day: If the DA is above about 2000 ft, the mag drops at full rich during runup start to get above the specified 175 RPM drop, getting progressively larger at higher DA. Leaning slightly eliminates this tendency.

Rich wrote: ↑
Mon Jun 29, 2020 12:44 pm
Hand-in-hand with this is leaning for takeoff at higher DA. Meaning above around 5000 ft. The normal procedure for doing this with a fixed-pitch prop doesn't work for a CS, so I'll initially use the lean setting I found gave me the desired drop during mag check and monitor EGTs, targeting 1300 deg for TO and climb.


In one of his classic "Pelican's Perch" articles (#63, "Where Should I Run My Engine"), John Deakin outlines his technique for maximizing takeoff power at higher DA:

John Deakin circa 2002 wrote:Somewhere above about 3,000 to 5,000 feet, leaning for takeoff starts to take on significant importance, and even more so with shorter runways, hot days, deep canyons, poor runways, long grass, and other performance-inhibiting conditions. Above those altitudes, the full-rich mixture setting is much too rich, and will cause a major loss of available power. Since the altitude has already reduced your power (less air), you’re not making as much heat, and you don’t need the excess fuel for cooling.

The books are full of various techniques for this, but I find the simplest and most effective is just add full throttle, full RPM, then grab the mixture knob and move it aggressively from full rich to whatever feels like “more power” on the takeoff roll. You can’t hurt the engine with momentary mixture settings like this on normally aspirated engines! Saw that mixture knob back and forth, and feel the power change in the seat of your pants! At some point as you pull the mixture out from full rich, you’ll feel the power first increase, then for a large part of the movement you’ll feel no power change at all, because the “best power” mixture setting is very flat in that area. (In other words, “best power” occurs over a fairly wide range of rich settings, but not at full rich.) Go ahead, pull it a bit too far, and you’ll feel the power drop off from being not rich enough. Push it back in to the point where you first felt the best power, and forget it. It’s quick, simple, and very effective, and pinpoint accuracy is not necessary.

The time to experiment with this is not your first takeoff from a muddy, short, dogleg runway with obstacles deep in a canyon, with a strange airplane when it is 110F in the shade! Work with it a little at a very high-elevation airport with lots of hard-surface runway to get the idea. It’s not hard, but it does take a couple practice runs to feel good about it. (Don’t use this technique in a turbo!)


Use this technique to identify your engine's EGT at maximum takeoff power (mine is Cylinder #1 = ~1300F). This reflects an optimal fuel/air ratio.

While mixture setting obviously varies, this target EGT is the same at any density altitude.

The full-throttle runup is the preferred method of takeoff leaning if you're really sure about the pristine nature of the runup area. Prop tally so far: 2

It's also one big reason I'm staying with the MT prop.

Regarding runup, from the same Pelican's Perch article (emphasis added):

John Deakin circa 2002 wrote:If you did lean, either push the mixture fully in for runup, or enrich it just enough to get runup RPM. A mag check with a leaned mixture is much more diagnostic than the normal runup at full rich, so if I do a mag check at all [i.e., during runup. John advocates for in-flight, high-power, LOP mag checks.], I’ll do it leaned.

I think most people overdo runups. Many go to ridiculous lengths to set exactly the RPM specified in the POH, and they prolong the agony far too long. From the hangar, I hear these folks on the runup pad at high RPM for agonizingly long periods. Folks, this is quick functional check only, and if the POH says “1,700” for runup, anything between about 1,200 and 2,000 will do just fine for the purpose of the functional check. Higher RPM makes a lot of unnecessary noise, heats the engine up too much if prolonged, and blows dust all over the place, not to mention picking up dust, dirt, and gravel, and chipping your prop and paint job. So run it up to around 1500 to 1700, don’t worry about the exact setting, and get on with it.

One short cycle of the prop with a 100 or 200 RPM drop is sufficient to indicate proper functioning, and further (or deeper) cycling accomplishes nothing, unless it’s very cold outside, and the prop is sluggish. All these oil-operated props on GA aircraft have passages that assure a continuous flow of warm engine oil to the prop internals. Some of the old radials get a bit sluggish and stiff in very cold weather, and a few more cycles on both the props and the feathering systems are often a good thing with them.